Thomas Crapper – the iconic British brand then and now

Thomas Crapper – the iconic British brand then and now 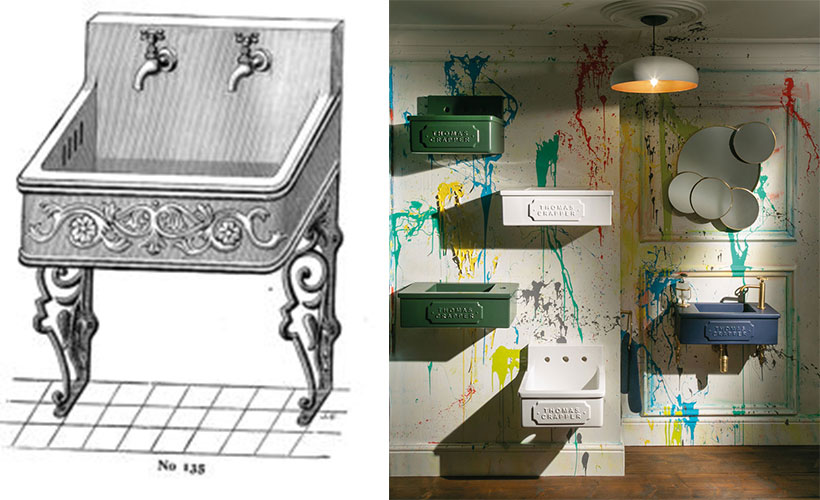 Thomas Crapper & Co Ltd. was founded by Thomas himself in London in 1861. The business supplied and installed bathroom and plumbing products throughout London; as such, he was responsible for many improvements in sanitary conditions and bathrooms in general.

The world’s first bathroom showroom boasted plumbed-in toilets so that clients could ‘try before they buy’. It also had huge plate-glass windows to show off the stock.  Such a display was market-leading and daring at a time when bodily functions were never acknowledged in polite company.

In 1886, the company was engaged by The Royal Household to design and replace the drainage and plumbing systems at Sandringham House; this project earned the company the first of its four Royal Warrants.

Thomas Crapper & Co quickly gained fame amongst the higher echelons of society; and started to supply many products and plumbing solutions throughout London and the Home Counties in particular.

In 1900, the company produced the iconic ‘Valveless waste preventer’, catalogue number 814, a designation still used today when describing the cast metal cisterns. The valveless waste preventer was the forerunner of the modern syphon flushing mechanism that was used in many hundreds of thousands of cisterns for around 100 years.

The valveless waste preventer became a ubiquitous feature of many houses and commercial buildings, including pubs and restaurants.

Thomas retired in 1904 passing the company to his nephew, George and business partner Mr Robert Wharam, Thomas passed away in 1910.

The company continued to trade successfully in London, moving to number 120 Kings Road, Chelsea in the 1920’s. When Robert Wharam died, leaving no heirs in 1963, ownership passed to a London plumbing merchant and sanitaryware manufacturer, Boldings Ltd. in 1963.

In 1999, Simon Kirby bought the company name and set about re-creating the brand, manufacturing authentic reproductions of Victorian and Edwardian sanitaryware and bathroom appliances.

Simon succeeded in creating a small, beautiful range of bathroom pottery and brassware true in almost every sense to their Victorian origins. With this range, Simon began serving discerning consumers and the architectural salvage market with bathroom products. Over time, there was a demand for the brand through retail bathroom showrooms and, by the 2000’s, around 15 bathroom showrooms displayed the Thomas Crapper range.

Hartford Holdings (the owner of Trojan Plastics, the UK’s largest acrylic bath manufacturer) purchased Thomas Crapper in March 2016, appointing Paul Dwyer as Managing Director. The intention was to grow the Thomas Crapper brand into a ‘serious’ brand contending in the market against its larger, established showroom competitors.

Today, the company continues to be devoted to quality in the design and manufacture of luxurious British-made bathrooms.  High-end, differentiated, bathroom products are available to consumers either directly or through 90+ appointed retail partners. This network is set to grow in 2022; and both a new website and brochure have been launched in February.

No products in the basket.